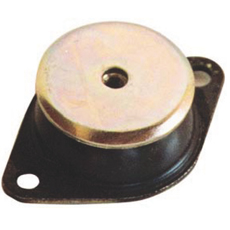 AVR is a support with radial and axial elasticity, appropriate in case of elastic suspensions of vibrating machines with horizontal components.

ADVANTAGES
• Easy plugging to the machine with the floor supports; possibility to delete all fixations.
• Fast mounting of the holder and easy display of the machine to the wanted place.
• Economic
• Three standard versions that allow chosing the holder according to the load and frequancy of the vibrations:
1. Soft: hardness A 45
2. Medium: hardness B 60
3. Hard: hardness C 75
• Possibility to fold the elasticity by displaying 2 holders AVR at each point of the support.
• Avoids the transmission of vibration to the building’s structure.
• It is suitable for turning machines at high speeds that generate continuous noise.

CONSTRUCTION / COMPOSITION
• The anti-vibration blocks will be in natural rubber protected on
the top by a metallic cupel.
• Absorbing part in natural rubber.
• Pre-drilled sole for floor fixing.
• The upper frame is circular and has a passing hole or screw or nut for fastening or holding the machine or the frame, which allows support overloads and protecting the rubber.
• The lower frame has an elliptical shape with two ears in which the drill holes to the ground.
• The two parallel reinforcements are connected by a rubber adhered to, dome shaped.

APPLICATION
• The AVR support has an elasticity substantially equivalent to its axial elasticity and it is effective against all vibrations however their directions is.
• The brackets are preferably mounted in rotary machines which do not have large dynamic imbalances, in which both vertical and transverse elasticity is desirable such as fans, rotary pumps, or frequency torque converters, electric motors, machines tabulations
• Working temperatures: -40ºC +70ºC
• Reducing the vibration effect, lateral and vertical, on motors or turning machines.
• For 2 speeds motors and rpm > 1 000.

PACKAGING
By bag of 4 blocks.

LIMITS OF USE
Rotation speed of the machine: 5000 rpm